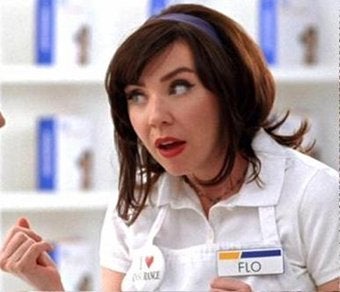 So you are probably wondering why Flo from Progressive is presented here. Well the last piece of mail that I received was an advertisement sating that I could get car insurance for $79.00 per month.

Car insurance, we all have to have it, it is the law. But how do you determine what company to go with. Obviously we look at what features are included in your coverage, can you pay monthly or is it an every six months billing type of situation? But most of all we want to know how much it is going to cost to insure our four wheeled child.

My Cecilia is a 1995 Ford Taurus with over 188K miles on her. She has bee through the ringer because my brother in laws children have pretty much tore the inside ceiling of the car. She has some dings but, she gets me from paint a to point be for the most part. On Thursday I went to a job fair in the morning and then to an interview later in the afternoon. I was going to take the back roads to the interview but the traffic lights were not working in my favor so at one point I got on the freeway the rest of the way there and made it with 10 minutes to spare. On the way home I did take the back roads and less than three miles from my house, poor Cecilia said she had had enough and so we waited in the parking lot of a funeral home for the tow truck to get us home.

The reason Flo is looking like that in her picture is that I told her, girl $79 per month, I pay $15 less than that with USAA, why in the world would I switch. She was not happy!! I love USAA, I bank with them and now my car insurance is with them and they are fantastic and yes of course my towing is covered up to 11 miles.

Nixon is dead, isn’t he?

Why has it taken so long?

One Liner Wednesday -It’s been a long time…

My Tweets
Be Inspired..!!

Listen to your inner self..it has all the answers..

Copious Morsels of Everything

Sharing tidbits of my world

Award-winning Author of Historical Fiction with a Twist

Coffee in the Rain

God has a plan for your life

'just a nobody with a blog'

The Sound of One Hand Typing

Running and life: thoughts from a runner who has been around the block

Riddle from the Middle

real life with a side of snark

Stuff That Needs To Be Said

Comedy, probably leaning a little toward the inappropriate

This, That, and The Other

She sails the seven seas in search of FREEDOM

~wandering through life in my time machine...you never know where it will stop next~

J-Dubs Grin and Bear It

As Always, More to Come

Musings and books from a grunty overthinker

If you want to be a hero well just follow me

A Unique Title For Me

Free to Be V

With Love, Hope, and Perseverance

Stories that touched my Soul.

Rebelling against a culture that values assimilation over individuality.